Five Easy Native Edibles Anyone (in North America)  Can Grow

Wild plums are any number of Prunus species that are native to North America and produce small edible fruit in the summer and fall. American plums, Chickasaw plums, and Mexican plums are common names for the most popular varieties of wild plums. Wild plums tend to form thickets when left to grow, spreading by root shoots and seeds. Chickasaw plums (Prunus augstifolia) grow best in the southeastern United States; American plums (Prunus americana) grows best in the northeastern and central parts of North America; and Mexican plum (Prunus mexicana) grows best in the South. Once a thicket of wild plums are established, they will generally produce a consistent crop. They will also prevent soil erosion and shade out competing vegetation. Wild plums are tasty fresh, or made into jams, jellies, and pies.

Wild pear is a type of European pear that has escaped cultivation in North America and now grows wild in woods and fence rows. The wild pear is extremely easy to grow, requiring virtually no care. The fruit of the wild pear varies in quality, since each tree is seed grown and genetically different. The fruit may be hard and only suitable for processing or cooking, or the pears may be sweet and edible from the tree. They are sometimes called deer pears because they are loved by deer and other types of wildlife. They almost always have beautiful blooms in spring.

Crabapple is a type of native American apple tree that produces small, very sour apples. There are over 35 distinct species of crabapple, all native to the temperate regions of the Northern Hemisphere. Depending on the location where the crabapple is grown, the native crabapple for that particular region is the easiest to grow. Malus fusca is native to the Pacific Northwest and grows the best there; Malus angustifolia is the southern crabapple and it grows best in the southern U.S. Crabapples can help pollinate other apple trees in an orchard setting. Crabapples are not edible when fresh, but they can be made into jams, jellies, and pies. 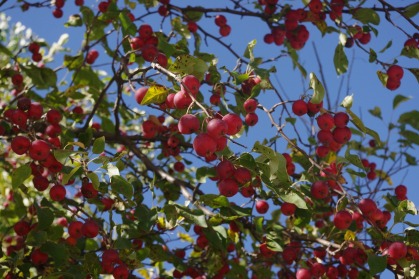 Red mulberries are produced on native American trees in the genus Morus. Red mulberries are native to the central and eastern North America, from the South up to Canada. They readily hybridize with the imported Asian mulberries (Morus alba), producing hybrid trees. They are fast growing, and heavy producers. They will begin producing berries at a young age. The trees tend to stay bushy while small, and may need to be pruned when young to shape them into a nice tree. Mulberry trees are easy to grow over a wide part of North America and have virtually no pests. The berries can be eaten fresh or used for jams and jellies. 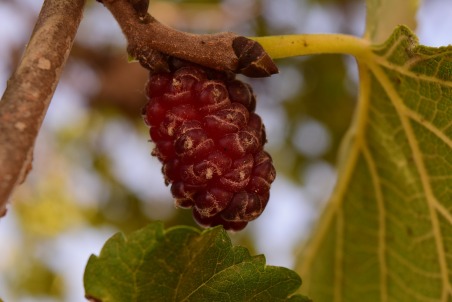 Serviceberry is the common name of numerous small trees in the Amelanchier genus. Most serviceberry species are native to the eastern half of the United States, from Texas to Florida, and up the eastern part of the country into Canada. Two species are native to drier, Western climates. In the southern U.S., Amelanchier arborea is the most common species. Though unknown to many people, serviceberries were once a common wild food for Native Americans and early European settlers. At least one species of serviceberry was used in the Native American food staple pemmican. Serviceberry, also called Juneberry or saskatoon, grows in deep acidic soils, often in moist habitats. The berries taste similar to blueberries, with the addition of an almond-type flavor imparted by the seeds. The berries can be eaten fresh, dried, or used for pies and jams. Numerous species of birds and mammals use serviceberry as a food source. The serviceberry itself is a pome, and not a berry as its name implies. In the wild, serviceberry is often the first fruit of the summer, ripening in June in many parts of the southern United States and later in more norther regions. The serviceberry is highly nutritious and contains high levels of vitamin B2, iron, and fiber. Serviceberry grows into a small tree or large shrub in the wild. The wood is extremely hard and was historically prized for ax handles. 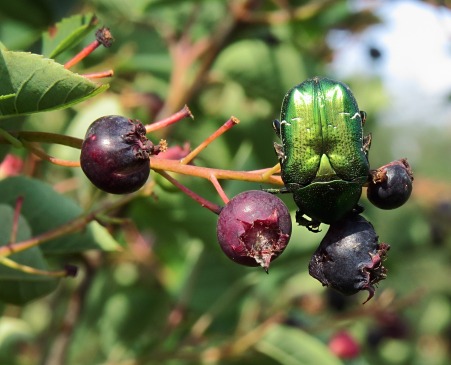 For more on easy edible plants, check out The Lazy Gardener’s Guide to Easy Edibles!